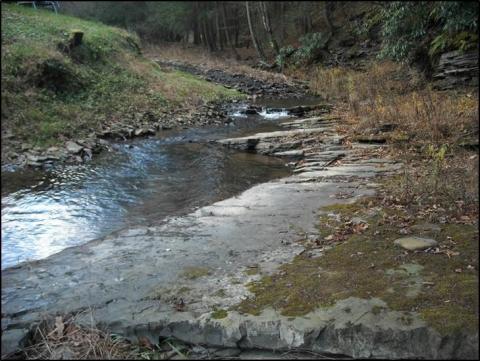 Researchers at Penn State are continuing to monitor a Pennsylvania stream where high levels of methane were observed near a reported Marcellus shale gas well leak.

Ongoing analyses of the stream, Sugar Run in Lycoming County, will be available on the Shale Network website, under the new Methane Project tab.

Multiple samples from the stream showed a groundwater inflow of thermogenic methane, consistent with what would be found in shale gas, researchers wrote in a recent issue of Environmental Science and Technology.

After the initial testing, researchers learned several nearby domestic water supplies had been contaminated by a Marcellus gas well that had been cited by the Pennsylvania Department of Environmental Protection for having a defective casing or cement.

“I found it startling that our USGS and Penn State team of four people did a reconnaissance of 15 streams and discovered one instance of natural gas degassing into a stream that may very well be explained by a nearby leaking shale gas well,” said Susan Brantley, distinguished professor of geosciences and director of the Earth and Environmental Systems Institute at Penn State.

Additional analyses of the degassing methane revealed characteristics also observed at the leaking gas well, but scientists were not able to prove the methane in Sugar Run is caused by the leak because they do not have baseline samples from the stream.

Researchers continue to travel to Sugar Run to sample the stream, and the continuing analyses of the water will be available in table form on the Shale Network website. Check back for updates.