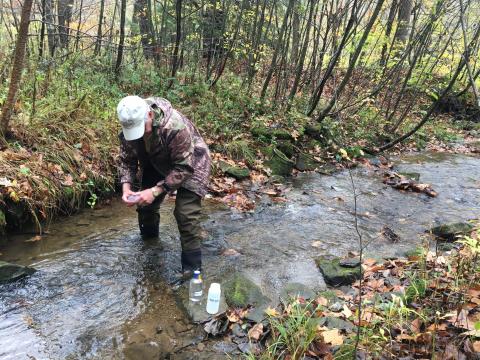 SHEFFIELD, Pa. — Bill Eckert slipped into his hip waders and splashed through the small stream near his cabin in the Allegheny National Forest.

He didn’t bring his fishing pole this time. Instead, Eckert bent down and let the cold water fill the assorted bottles he carried.

Eckert was among a few dozen volunteers collecting water samples that could help researchers develop a clearer picture of water quality in Pennsylvania.

“If you enjoy the outdoors, you’re sort of concerned about preserving it, making sure the streams are clean,” Eckert said on a cool October morning.

The effort was part of Snapshot Day, a recurring event organized by Penn State researchers and Trout Unlimited to get volunteers out to sample streams in different parts of the state.

Back at Penn State, researchers test the water samples for things like methane concentration, which can be an indicator of contamination from Marcellus Shale gas extraction or old, forgotten conventional oil and gas wells.

“We started this project initially to monitor streams around Pennsylvania using volunteers to help look at methane in stream water,” said Joshua Woda, a graduate student in the Department of Geosciences who is involved in the project.

The tests can help fingerprint the methane’s source, weeding out natural causes often found in streams from things like swamps or bogs.

If scientists find elevated methane levels, they can identify the area as a hot spot and put more resources into investigating what is happening there.

“We look for these elevated values, and when we see them over a certain threshold, we start to ask questions,” Woda said. “Why is this elevated?”

The work is part of a larger effort to help better our understanding of baseline water quality across the state. The data could be an important measuring stick if we someday face future water quality issues.

But gathering the information is no small task. There are hundreds of streams in Pennsylvania and only so many researchers working on the project.

“By volunteering to collect water samples around their communities, citizen scientists can play an important role in helping researchers better understand water quality in Pennsylvania,” said Susan Brantley, professor of geosciences and director of the Earth and Environmental Systems Institute at Penn State, and Woda’s adviser. “These samples help paint a clearer picture of baseline water quality around our communities, and can be used to watch for potential future environmental impacts.”

In the Allegheny National Forest, researchers were interested in the possible impacts of so-called orphaned and abandoned oil or gas wells. Some of these wells date back more than a hundred years, and if they aren’t properly plugged, or if they have been damaged over time, they could potentially allow contaminants to enter the atmosphere or waterways. Estimates put the number of unlocated wells as high as 500,000.

On Snapshot Day, volunteers fanned out across the forest in groups, visiting small headwater streams, so numerous that they sometimes receive less monitoring than the larger streams and rivers they feed.

“There are just so many of them that agencies don’t have the capacity to comprehensively monitor them,” said Jacob Lemon, a science coordinator with Trout Unlimited. “That’s why it’s really important to get volunteers in there. You can get local boots on the ground. These people are the ones that spend time out there. They know what the streams are like and what they should be like.”

The event is a way to get more Trout Unlimited members involved with ongoing water quality monitoring projects the group regularly undertakes.

For Eckert, who was attending his first Snapshot Day, any time spent among the trees and streams in the forest is good. Helping monitor water quality is an added bonus. “We’re not wasting time,” he said.