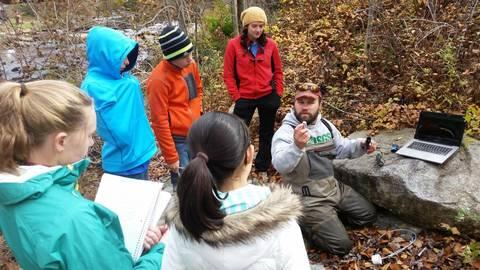 If anything happens to the water in Black Moshannon Creek, a group of State College Area School District earth science students might just be the first to know.

The teens, mostly from State High but with a few advanced eighth-graders thrown in, have been monitoring the watershed this year in partnership with researchers from Penn State’s Earth and Environmental Systems Institute.

The project, called TeenShale Network, gives students a chance to learn science exists outside of their textbooks and classrooms, and that their work can make a difference in the real world.

“I think TSN is important, because I think that people should have more awareness for the environment when they are younger,” said Toby Ma, an eighth-grader participating in the group.

They are looking for changes in water quality that could be caused by pollutants from sources like nearby natural gas drilling sites.

Hydraulic fracturing, or fracking, is used to extract natural gas from rocks deep underground and the process has been controversial due to potential environmental impacts.

Sampling the stream gives students a baseline of water quality, and going back lets them see if anything has changed due to fracking or other factors.

Check out the full story at www.centredaily.com/news/local/education/penn-state/article78736852.html