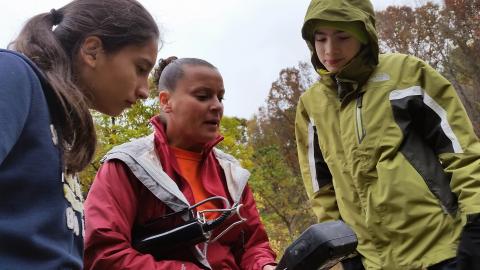 RUSH TOWNSHIP, Pa. -- The boots Maria Rodriguez-Hertz wore kept out the water but not the numbing cold from Black Moshannon Creek.

Rodriguez-Hertz, a State College high school sophomore, waded into the stream along with her classmates to collect water samples and record data for the TeenShale Network.

The network is a collaboration between Penn State researchers and high school science students and teachers. Together, they monitor the stream for potential environmental impacts, such as from Marcellus Shale gas drilling.

With the help of the students, the network is growing.

Last year, students collected data from only one site. This year, two new sites were added downstream, strategically chosen because they are close to Marcellus Shale well pads.

“Having multiple locations lets students see how the water changes as it flows downstream and is exposed to both natural and man-made influences,” said Penn State researcher Jennifer Williams. “I think it’s incredibly valuable for the students to see how one site at a local state park that is considered pristine and utilized in a variety of different ways can change over its course of reach downstream as it passed through our community.”

Nearby Marcellus Shale wells are one possible man-made influence. To get the gas out of the ground, a process is used called hydraulic fracturing, or fracking. This process is controversial and scientists have been studying its possible environmental impact.

The students are providing scientists with baseline data on what the stream looks like now, which can be used as a reference to examine possible future impacts.

To make these measurements, TeenShale Network is able to use professional scientific equipment thanks to its partnership with Earth and Environmental Systems Institute at Penn State. In return, the students provide Penn State with valuable data, which goes into a large database available to researchers.

“It gives you a real science experience you don’t get in the classroom,” said Alison Weiss, an eighth-grader. “I learned what it is like to take actual measurements instead of projects that have already been recorded in class.”

Eighth-graders like Weiss participated in the network this year for the first time. Previously, only ninth-grade students were involved. Some of those students, now in 10th grade, also returned for another year. This gives newer students the chance to learn valuable skills from their older counterparts. Also, it gives the older students the ability to teach others about what they have already learned.

“I’m there to point students in the right direction,” said Lena Nyblade, a 10th-grader who returned for a second year and took on a leadership role with her younger classmates. The older students have shown their classmates how to use and read equipment in the field and have gained new experience thinking about the project in a different way.

The younger students like eighth grader Aaron Li got a preview of the type of science they will continue to learn in high school.

“I wanted to increase my knowledge about the subject that I didn’t know much about before,” Li said. “I hope to get more experience in hands-on activities.”

In the field, Nyblade and the other 10th-graders showed their classmates how to use equipment, like the water-quality sensor called the Horiba U-53. The sensor is used to measure pH, temperature, dissolved oxygen content and other data that are indicators of the health of the stream.

The students also waded out into the water to use equipment called a Flow Tracker to measure the flow and depth of the creek and to collect samples to send back to Penn State for testing. Williams said they are the same types of experiments professional scientists do in the field.

Student said testing and sampling in the field is much different than in the classroom, where experiments often have predictable answers.

“In labs in class, everything is usually a lot more controlled,” Rodriguez-Hertz said. “There aren’t many variables, but here there are many variables that you have to think about.”

Students had to take into account things like the changing weather they experienced during their eight field trips from the fall through late April. The climate was different on each of the trips, and that greatly influenced the stream and the accessibility of the sites.

In the winter, deep snow covered many of the sites, and some trips had to be canceled. When the snow began to melt, the stream was very high and fast moving. Students had to consider things like whether salt added to the roads over winter would make its way into the streams and affect their data by changing electrical conductivity and chemical composition.

“In the classroom setting labs and activities have parameters that are predictable with some aspects of discovery,” said Phil Gipe, a ninth-grade earth science teacher. “In real life, scientific field studies, like what we’re doing here, many unknowns creep in such as logistics, supplies, organization, boots that leak, unforeseen challenges and problem solving. A project such as this really mirrors real life science in the field, science as it currently is.”

The students spent class time during the year analyzing and graphing their data. They presented their findings and their goals for next year at the annual Shale Network Workshop in May in State College.

The writers of this article are students at State College Area High School.

This article originally appeared in the Centre Daily Times.