Use the following DOI to access the Shale Network database: 10.4211/his-data-shalenetwork

Exercises that guide participants through the initial stages of a hypothetical water supply complaint investigation where methane has been detected in surface water in Pa. Visit Carleton.edu to try it out.

The Pennsylvania Department of Environmental Protection has released a phone app to access the DEP oil/gas well database and to track additional well sites that may not have been reported.

WellMapper is now available for download at the Apple Store. An Android version of the phone app will be available soon.

The work, supported by a new $1 million grant from the National Science Foundation, pairs a cross-disciplinary team of Penn State computer scientists and geoscientists studying methane concentrations in the state's streams, rivers and private water wells. 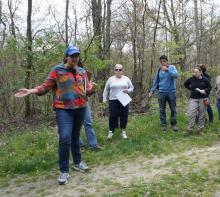 More than 150 years after the first commercial oil well was drilled in Pennsylvania, decades of energy exploration have resulted in hundreds of thousands of abandoned, lost and forgotten oil and gas wells scattered across the state.

Researchers at Penn State are among a number of organizations in Pennsylvania working to locate and assess these so called orphaned and abandoned wells, which if not properly plugged, or if damaged over time, can potentially cause air and water pollution.

If anything happens to the water in Black Moshannon Creek, a group of State College Area School District earth science students might just be the first to know.

The teens, mostly from State High but with a few advanced eighth-graders thrown in, have been monitoring the watershed this year in partnership with researchers from Penn State’s Earth and Environmental Systems Institute.

The project, called TeenShale Network, gives students a chance to learn science exists outside of their textbooks and classrooms, and that their work can make a difference in the real world.

The fifth annual Shale Network workshop took place May 19 and 20, drawing a large, diverse group including government workers, industry representatives, environmental group members, students and academics. About 97 people attended all or parts of the workshop, including a field trip, poster session, computer module and daylong session of presentations and discussions.

A group of local high school students are slipping into their hipwaders and wading back into the TeenShale Network.

With the school year back in full swing, students at State College High School have resumed work on the project, which pairs the youngsters with Penn State researchers to monitor water quality in Black Moshannon Creek.

This year, 28 students are taking part in TeenShale network, ranging from 8th to 11th grade. They will build on work the returning students have done the past three years, and search for their own hypotheses in their data.

The Shale Network datasets now have a DOI, or Digital Object Identifier, that can be used when citing the data in publications.

To access the datasets through a DOI, visit a DOI resolver, like the one found at www.crossref.org/05researchers/58doi_resolver.html, and enter 10.4211/his-data-shalenetwork

To database should be cited as: ShaleNetwork Database. DOI: 10.4211/his-data-shalenetwork 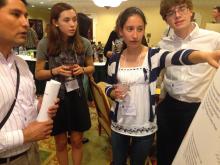 STATE COLLEGE, Pa. — A diverse group — from natural gas industry representatives to environmental advocates — gathered recently to discuss the impact of gas drilling on waterways at the 2015 Shale Network conference.

The annual workshop gives scientists a chance to share what they’ve learned over the last year about the impact of Marcellus shale gas drilling on the region’s streams and rivers, and to plan the best way to monitor water quality going forward.

RUSH TOWNSHIP, Pa. -- The boots Maria Rodriguez-Hertz wore kept out the water but not the numbing cold from Black Moshannon Creek.

Rodriguez-Hertz, a State College high school sophomore, waded into the stream along with her classmates to collect water samples and record data for the TeenShale Network. 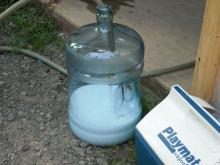 Substances commonly used for drilling or extracting Marcellus shale gas foamed from the drinking water taps of three Pennsylvania homes near a reported well-pad leak, according an analysis from a team of scientists.

What is This?
HydroClient is a free web application that helps anyone search for, download, and visualize hydrologic and climate data registered with the CUAHSI Hydrologic Information System. HydroClient is located at data.cuahsi.org.

Who Can Use HydroClient?
Researchers, citizen scientists, students, anyone. Shale Network publishes data online that can be discovered using HydroClient. If you are interested in working with us on the project, please introduce yourself using the Discussions tab.

How Do I Use HydroClient?
The best way to get familiarized with HydroClient is to try it out at data.cuahsi.org. Here is a brief HydroClient tutorial that will help get you started.

What is This?
An R package in the CRAN library is available for accessing and analyzing data in CUAHSI’s catalog. For more information, visit the CRAN website.